(The LORD is gracious and merciful, slow to anger and abounding in steadfast love. The LORD is good to all, and his mercy is over all that he has made.) [Verse 8 and 9]

145:10 All your works shall give thanks to you, O LORD, and all your faithful shall bless you.

145:11 They shall speak of the glory of your kingdom, and tell of your power,

145:12 to make known to all people your mighty deeds, and the glorious splendor of your kingdom.

145:13 Your kingdom is an everlasting kingdom, and your dominion endures throughout all generations. The LORD is faithful in all his words, and gracious in all his deeds.

145:16 You open your hand, satisfying the desire of every living thing.

The lectionary doesn't include verses 8 and 9 which provide important context for this passage.  Attributes of what God is like - merciful, slow to anger, abounding in steadfast love.  People have varied ideas about what God is like - at the time of the writing of the Psalms gods were often considered to be mean, vindictive, and propping up only the powerful.  The Jude-Christian view of God is much more gentle and just.

Reflect on verse 14 - The LORD upholds all who are falling, and raises up all who are bowed down.
Spend as much time thinking about how this applies to you as you do thinking of those you know who are struggling at the moment. 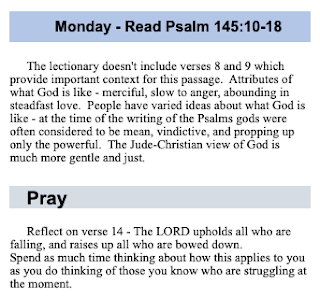